Bohemian Rhapsody, the smash hit movie / biopic / musical centred around the rock band Queen and their iconic front man, Freddie Mercury, is the subject of this post.

There are spoilers below. 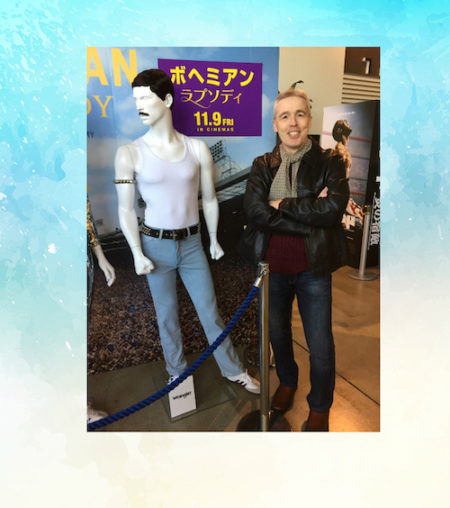 Queen has a loyal mostly middle-aged fan base in Japan and the group’s backlist of hits alone must have been a dream come true for the movie’s marketing/PR teams.

I got caught up in the movie trailers on Twitter and YouTube quite early on. It was also interesting to see how the number of cinemas in Japan offering karaoke-style versions rocketed from two when it opened to around one hundred now.

Box Office mojo gives a good idea of gross takings around the globe.

I’ve seen Bohemian Rhapsody twice this month, the second time in an iMax theater. I might go a third time too, and to the sing-along version, but probably not dressed in Freddie gear.

There are fun videos on YouTube of movie goers in Japan wearing Queen/Freddie regalia.

And more power to them.

A lot of film critics panned this film early on for, I guess, probably valid reasons based on their knowledge and opinions of what makes a great biopic.

But then, critics, by the very nature of the job title do not create. Many often deconstruct and analyze the work of artists into areas the creators themselves had little conscious awareness of.

Yes, it can be interesting and occasionally beneficial to read a review or a criticism from someone who knows what they are talking about because there’s no end to the learning of story-writing craft. But even then, I still take opinions about books, movies, music as just that: opinions.

I remember hearing Queen’s ‘Seven Seas of Rhye’ on the UK’s Radio 1 when it was released in 1973, and then of watching Queen mime through Killer Queen on BBC’s ‘Top of the Pops’ a year later.

And while I was never a true fan (never bought any of their records) I know most of their hits and watched all of Live Aid on the boob tube. I was one of many saddened by Freddie’s death but then lost touch with Queen (and much of what passes for popular music too) when I moved to Japan in ’94.

Still, somebody got something right with this movie because I find myself entranced by the emotional pull of Bohemian Rhapsody. Again, not enough to go buy stuff (other than movie tickets), but by a feeling, call it opinion, if you like, around how many of Queen’s songs speak to the pain and the ecstasy, the joy and the loneliness, of this thing called love (sorry, I went there!)

I only learned of Queen’s surprising 1975 tour success in Japan after the movie’s juggernaut media blitz began here. A TV interview with a veteran Japanese music magazine journalist described how Queen’s glam rock appeal arose from a unique foreign combination of fashion, style and music that teenage girls and young women felt drawn to.

Queen’s aura contrasted with the mostly male audiences of top rock acts at the time, for whom conversations revolved more around guitars and amps and the technical wizardry of the performers and their equipment. And it seems that Queen did not forget their Japanese fans adoration over the years.

Then what is the appeal of Bohemian Rhapsody that has made it such a surprise hit? I think the casting and, of course, the band’s music both played a major part but what made the whole show work, in my opinion, was how closely the story followed a classic ‘hero’s journey’.

This is Hollywood in fine form (despite the drama behind the film’s nine year gestation) and demonstrating how to wield the power of a mythic structure that underlies the life of a showman performer like Freddie Mercury.

Yes, some actual events and storylines were altered to fit a narrative style that has only about two hours to give glimpses into the life and times of a gifted but lonely, and ultimately tragic hero.

And I think that’s what great writers do best; they meld the truth with a heroic story that people can identify with. (Stuart Voytilla’s book, Myth and The Movies, covers this ground well, for fifty unforgettable films.)

In another inspired decision, the movie credits rolled to actual footage of ‘Don’t Stop Me Now’. Not a person moved in the cinema while that track played and I like to think that was the hidden message in this biopic and why audiences have so much warmth and gratitude for the existence of this homage to Queen and Freddie.

Short story #9 is late! It should have been published week of 10 December and so I’m now running two weeks late. Not to worry. I will make up the time in January.