Nanowrimo’s underway and so is my story, Lunar Blackout. It’s shaping up to be the prequel to a number of time travel books (a trilogy, perhaps, but we’ll see) I’ve mentioned before. 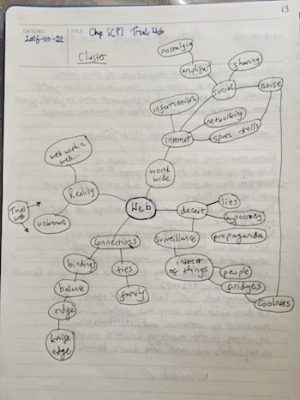 The picture above shows a cluster diagram I made around the keyword, web. Longtime readers of this blog may recall that I am a mind mapping fan and have used maps of one sort or another since the mid 1980s.

The cluster diagram is similar in concept in that it aims to foster the creative association of ideas without edit or judgement. Critical comment comes later when whatever vignette, poem or ideas that arise from the cluster are up for review and refinement. (My use of clustering is based on what the late Gabriele Rico wrote in her book, Writing the Natural Way.)

This Web cluster took about five minutes to create. In fact, I think that setting a timer when clustering is a great way to keep the self-editor busy with watching the clock! (Fits in well with timed writing when starting to write scenes.)

I then wrote a twelve-line vignette using some of the clusters, revised it, and now find that the first version was spot on. The subconscious mood maker can be a funny old thing,

To be clear, when I did this exercise it was not with any particular books in mind. Just playing around with idea generation. However, now that I am focused on writing Lunar Blackout, it appears to have some significance to the theme (time travel) and is pointing out (to me, the author) some directions that the story may well go in.

I intend to carry on with writing quick clusters as a warm up before writing a scene. Once the Nanowrimo dust has settled in December, I will be curious to see if and how clustering has influenced the book.

Here is the original vignette with only a few words changed and typos fixed.

Could this unknown reality

be a web within a web

where connections and bindings renew

or even come undone

before each new day begins.

A net of things unknown but not forgotten

itself balanced on the knife-edge

between actualization and rejection

a cosmic amplifier of sharing and caring

of indifference and neglect