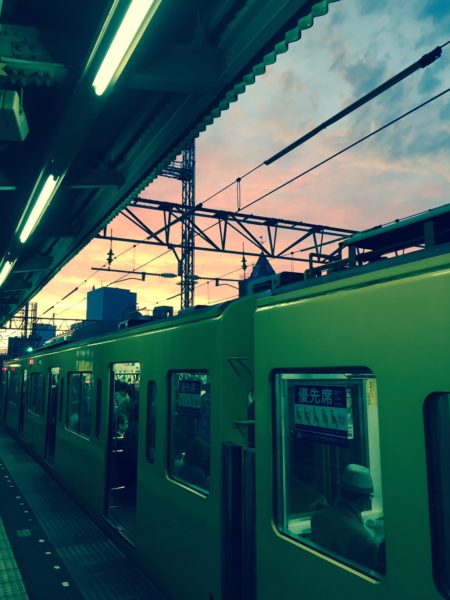 With the hot and humid Tokyo summer only a matter of weeks away now,  I’m determined to enjoy what’s left of a pleasant spell of warm and mostly dry weather. (Warm, for me, means an air temperature less than 27°C with a relative humidity below 50%.)

For example, it’s still possible to sit and write next to an open window in the early morning quietness, and to not have sweat from my wrist moisten the paper or smudge the words.

The annoying whine of mosquitoes has yet to be heard.

But even this opportunity will soon wilt in the heat once the rainy season weather front has meandered up and down much of the Japanese archipelago. And after the muggy, cloudy, rainy days will come weeks thick with summer stickiness and lethargy,broken only by the occasional thunderstorm.

Of course, there is air-conditioning in almost every modern dwelling. However many of the older, traditional wooden houses rely on opening their sliding windows and doors on all four sides to allow some form of airflow. This doesn’t always work when the air is very hot and there is little breeze.

In theory, the north-facing man cave in which I do most of my writing should be cooler. In practice, it’s hellish hot in the summer and brass monkeys chilly in the winter. The coldness I can handle by putting on some extra layers of clothing, plus a few blankets. It’s rather cozy to be tucked up and writing my wee heart out.
Summer is not so forgiving, and anything over 35°C is a torture for both body and spirit. So why not install an air-conditioning unit in this room? Long story short – I’m a stubborn old stoic.

Over on my nonfiction blog, justfiverules, the creative burst of activity is at long last almost complete. My eBook about self-coaching has been published and the paperback version will be uploaded into the clutches of Amazon’s CreateSpace print-on-demand system. I might outsource next time but I’ve found that it’s often a good idea to do the first one myself. More evidence of ingrained stoicism!

Stubbornness is probably also behind my thinking that I could run multiple writing projects at the same time.

If rule one is take action; then rule three, focus on one thing at a time, is twinned with this writer’s creativity. I can blog, edit drafts and procrastinate (on social media haha!) with the best of them, but the honest-to-god, butt-in-chair, do-the-work thing of writing new fiction is one damned word at a time, one book project at a time. This much I know now.

And that revelation brings me to the book project bobbing up and down on this site. I’ve done a piss-poor job of pantsinga draft zero of The Zelkova Tree. There are a few posts here that document that misery, along with a couple of recent NaNoWriMo attempts. I shudder at the memories. Anyway, here’s what I have so far. It might change.

Beyond that, I prefer not to say. Better to do the work and then leave the judgment up to the readers. There are a gazillion other books out there and I appreciate anyone who sticks around for the ride.

However to whet your appetites, I will release a number of short stories from The Zelkova Tree world.
(I guess that my interest in the short form probably comes from all those work-for-hire copywriting projects I did as the samuraiwriter.)

The shorts will probably range all the way down to flash length micro stories, as this variable length also provides space in which to generate ideas, characters and story themes. Many, perhaps most of them, will be for my own private writing practice and will not see the light of day. (Cheering from the galleries!)

At least, that’s the plan, although I recall the boxer, Mike Tyson, saying something about everyone has a plan until they get punched in the face. Yes, indeed.

In terms of structuring and then writing this series, I’m drawn to make use of the following resources:

May the time be with me!