Last year’s Nanowrimo ended in defeat for me: no 50,000 words.
Not even close.
Fear of failure and an angst-heavy critical voice broke the flow.
Well, that’s my pathetic excuse.

I am better organised this year. 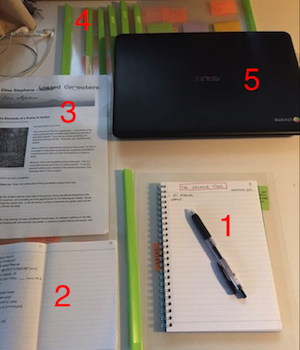 The photo shows five ways in which I am aiming to achieve the goal of having a readable first draft by the end of November.

I’m writing the story in a paso doble style, where action in each plot thread is as high energy as in the famed Spanish dance.
Of course, readers will find quieter interludes where the pace is slower but all may not be as it seems.

My trusty analogue tools. I enjoy writing character sketches, plot doodles and just plain getting away from the screen and typing mode of work/creativity.

I’ve experimented with many systems since the world of work introduced me to Day Timers and all the paraphernalia beloved of time management trainers.

There’s no great magic here, in my experience. I have an average daily word count goal of 1667 in order to reach 50,000 by the end of November. In my case that works out to be around two hours of writing each day. BIC equals bum-in-chair. That’s it.

Or, that would be it, if real life didn’t have a nasty habit of eating up whatever discretionary time is available. Scheduled time for day job stuff is already a given. The trick, I think, is to be aware of the endless discretionary tasks and responsibilities tugging at my writing elbow.

They get logged in this small book of terror (haha) and then knocked off as and when the opportunity arises. The knocking off is based on Mark Forster’s Final Version Perfected (FVP) algorithm.

This is a wonderful way to write.

In a nutshell, you finish what you start. So, if I am writing some dialogue for a scene, I set a timer for five minutes and then write the dialogue part of the scene.

Once writing begins, elements other than dialogue tend to make an appearance:

The usual suspects of a well-written story are always lurking somewhere off stage. I hope I can direct the cast to turn up for showtime!

Actually, the very act of directing is the bit my conscious mind (aka critical voice) gets too deeply involved in.

Timed writing gives this meddler something else to focus on and makes it easier for the creative voice to sing its song. The novelist, Elise Stephens, describes a style of timed writing that I can identify with in her post, Timed Writing and Why You Need It.

Elise has been fortunate to have done timed writings with Jack Remick in Seattle. I am a tad envious.

For Nanowrimo, I am doing most of my timed writings on the Chromebook. However, if I get ahead of my target word count I may do some of them using pen and paper, and then type up as I go.

Filamena Young wrote a fascinating post on using the bullet journal as a Nanowrimo writing journal. I had a look at this and decided to adapt it to using plastic file folders and post-its. One file is for character info. The others are for different stages of that paso doble plot construct from another world haha!

Since I am outlining as I go, the plan is to add post-its to the relevant file as the story evolves. That way I can scan through them and get a fast overview of the plot threads, inconsistencies, dead ends etc. It’s worth a shot and gives my zany organizing mind something to worry about.

Has he got enough pink-colored post-its. Oh no! We must buy more!

The story is being typed up here.  It’s a neat device that gets the job done.

OK, back to the story writing!