Following Through On The App Between Your Ears

A guy in an online marketing forum was complaining recently that he couldn’t get much done because of the distractions offered by the Internet.

It was seriously affecting his productivity.

I know this one well, having experienced the same while doing research for a product or an article. Very easy to get off track.

Some posters were sympathetic to his plight and suggested various solutions such as working offline (disconnect the Net connection) or get an accountability partner.

My advice was to use FireFox LeechBlock to restrict access to particular sites on a time basis. See my Aug 2008 post about How To Stop Your Life From Leeching Away.

Others adopted more of a tough love approach and suggested he examine his own motives and behaviours (the app between your ears!) for being lazy.

As a coach I was pleased to see how supportive the sort it out, mate posters were, bearing in mind how some forums can turn into vindictive flame fests. Not this one!

YOU AREN’T LAZY. YOU’RE BEING LAZY!

One poster actually made a point of clarifying this so the guy would know people were calling him out on his behaviour, but not as a person.
Real world coaching, if I may say so myself.

Of course there are limits as to how effective mostly anonymous posters on an Internet forum can be.

To give you an idea of what I’m doing with LeechBlock, take a look at these three screenshots:

Here’s what used to happen when I visited a blocked site:

Yes, I restrict Twitter usage until after 9pm Japan time and this means I have a chance to get some writing or coaching done. (Oh to be a media celeb and outsource your Tweets. Hey, for a suitable fee I’d happily ghost-tweet the banalities of the rich and famous NOT!)

I decided to change the blocking screen, so here’s what I now see when visiting a site on my hit list: 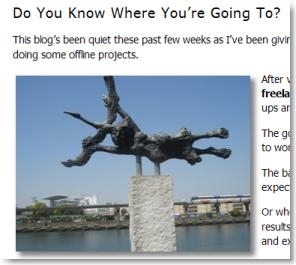 The key message (for me) is in the symbolism of the text, Do You Know Where You’re Going To?, along with the image of the Tokyo monorail, the river and the unusual sculpture.

So every time I visit a banned site, I’ll be denied access AND this image will ping my awareness. Pretty powerful, habit-building stuff to support that app between my ears!

The third screenshot is how I configure the soft denial list (&Block Set 2) of sites. These are sites I can’t visit between the hours of 8am and 9pm Mon - Sat. (Sunday gets a free-pass, and I allow everything all day long.) 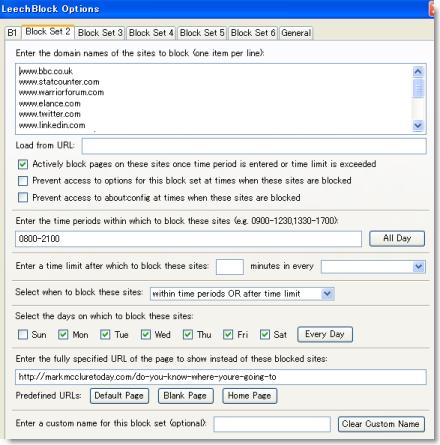 I have another list of sites (mainly online newspapers and special interest sites) that I ONLY allow access to on Sundays because they’ve been real time sinks for me.

THE DESIGN FLAW IN THE HUMAN MIND

Of course people have been battling procrastination and laziness since time immemorial:

Many of us are filled with the best of intentions; goals and resolutions are evidence of that.

So why do we keep sabotaging our own success by not consistently following through?

These two gentlemen might just have a working solution to that conundrum.

Psychologist, Steve Levinson and Peak Performance Educator, Peter Greider, paid attention to nature and came up with an intriguing theory on what they call an inherent design flaw of the human mind.

(I don’t think there’s a single solution for all people and all scenarios but, as Steve and Pete’s work suggests, there’s a lot we can learn from the instinctual habits of animals such as squirrels.)

The idea that Mother Nature might hold some of the answers (after all, she’s been around for a while, is highly adaptable and still gainfully busy) interested me enough to buy their book Following Through Habit Change Motivaider, and an incredibly useful little device called the MotivAider.

PS: I realize that for those of you in the corp world it may not be possible to install LeechBlock on computers at work. I had the same issue in 2006 although, to be frank, you probably shouldn’t be surfing on company time anyway! My use of LeechBlock is because I now work at home and am my own boss. No risk of the sack if I goof off all day, but no money comes in either.

PPS: My use of LeechBlock follows one of the strategies described by Steve and Pete for following through. Can you guess what it is? (2 words)