Strive For Happiness Together

I discovered Judith O’Reilly’s blog, Wife in the North, sometime in early 2008 while searching for bloggers who became published authors. 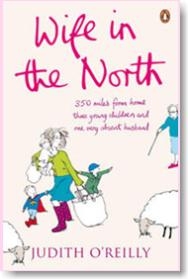 What struck me most about her career change was that she abandoned her successful role as a journalist for the Sunday Time newspaper in London, to go live up North with her very absent husband and family.

And we’re talking Northumberland here, a part of Northern England where the Roman Emperor Hadrian’s soldiers had their hands so full dealing with Picts and bandits in AD 122, that they built a 117 km long wall to keep the buggers out.

From her posts I got a taste of the lifestyle shock Judith experienced in swapping convenient, crowded London for a muddy, wilder but quite beautiful North.

And so it seems to me that the blog itself became a sanity valve as she tried to make sense and nonsense of this new life, although I suspect that her sense of humour would have taken the strain, blog or no blog.

I also felt that Judith and her husband must have been through a lot over the years for her to agree to make such a change, especially because he was then often away on business (the very absent husband from the book’s cover page subtitle.)

From my own experience I know that mid-life career change is not necessarily a well-executed A to B successful transition. The feelings, fears and hopes of others we care about are also intertwined with our own.

That’s why I was both saddened and gladdened to read (see below) of the pact that Judith and her Husband made to strive for happiness together. And in sharing that pact she gives us a glimpse into the thinking that enabled her to make the move up North.

Please note that the post I’m linking to below may be upsetting to some readers as it concerns her first son’s stillbirth some years ago.

However, Judith’s writing is of such strength and beauty that she is able to share the emotional impact of her terrible loss in a manner that lets us appreciate how the reverence for a stillborn life can lead a couple to somehow strive for happiness together over the years.

PS: Judith’s book, Wife in the North, is published by Penguin and available on Amazon.co.uk.