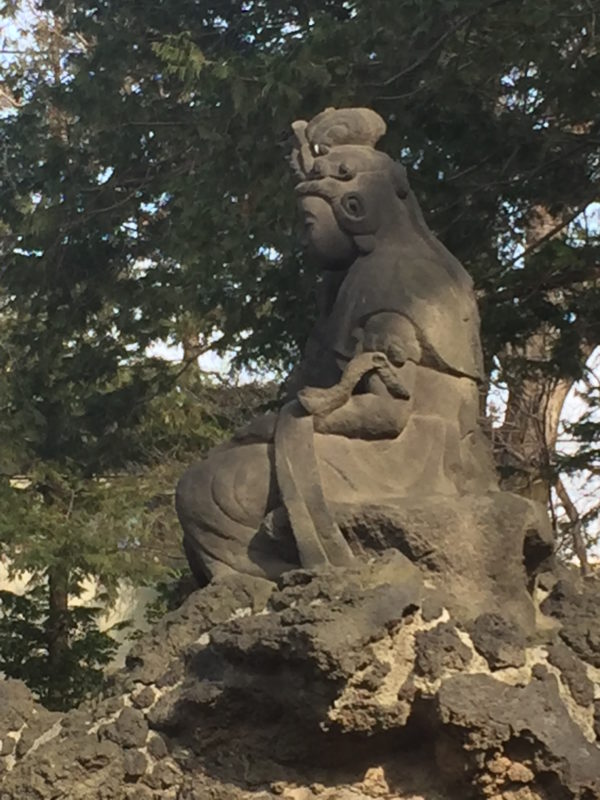 The Chinese lunar new year brings many tourists with money to spend to Japan. And boy, do they know how to shop. Brand name consumer electronics and luxury goods get snapped up in enormous quantities. Forget shopping bags. These folks count items by the shopping cart. There’s even a Japanese expression for the phenomenon which translates to something like explosive shopping.

Over the centuries much was borrowed from China (and from other countries, such as Korea) and adapted to fit Japanese sensitivities. So, in one way, this tourist invasion resembles an exchange of value in the opposite direction. One with, it is to be hoped, economic benefits for both countries.

An example of Chinese influence now long a part of Japanese culture is Setsubun where, on Feb 3rd or 4th, the day before the lunar new year, various rituals occur to drive out evil spirits from the year past while inviting good luck in for the year ahead.

I have warm memories of my wife and daughter throwing roasted soy fortune beans (fuku mame) around our apartment and exhorting evil to get lost and good fortune to come on in.

And then we got to eat similar beans, but not the ones on the floor, although the dog sometimes scoffed the lot before we could scoop them up later.

Placebo beans. What a great idea! Even more fun for me as a writer is how these magical family experiences can sometimes become the germ of a story idea.

For example, what if a handful of these beans contained a store of magic (a la Jack and the Beanstalk) and before the human family understood what was happening, their dog had eaten the lot and started communicating with the young girl in a telepathic manner.

And next, let’s imagine the dog and daughter going on the run from the local big bad; a lowlife punk with muscle and influence who wants those beans so badly that he’s vowed the pooch will have to die for the sake of his evil ambitions.

Sounds like a possible YA fantasy story, right?
Well, maybe not.

OK. But what if our beans contained futuristic nanotechnology molecular drones that hunted down bugs, bacteria and the like and then zapped them. Or more nefariously, what if these drone swarms turned rogue and ganged up on the inhabitants? Instead of a haunted house, we have a hunted house with blood on its hands.
I can just see the tagline:

So, who you gonna call? Ghostdusters!

Our potential story now has a possible scientific angle to it. One that is much more to my liking.

And extending the idea just a little further, what better way is there to spread an invasive, privacy-busting technology than by the power of superstition?

Try to imagine tiny armies of weaponized molecular computers flying and crawling into the darkest corners and crevasses of dwellings across the land, programmed to hunt and cleanse the remains of an old enemy’s bio-invasion.

Add in a legal requirement to ingest an exact number of the fortune beans equal to a citizen’s calendar age, and the state gains ever vigilant biomedical and security monitoring of its populace.

Not enough nano-buddies inside your personhood? Then, get the dose sorted pronto, before access to food, meds and e-currency stops for you, peon.

With practice, it gets easier to come up with science-rich story ideas. So much so that they sometimes swarm and buzz inside my skull looking for an opening, a way out into the world, but often at the most inopportune of times.

That’s the easier side of what I understand to be the art of writing fiction.

Yes, I’;m talking here about an artistic process that takes just one of a gazillion, germinating story ideas and applies the cerebral equivalents of water, sunshine and biochemical mysteries until it starts sprouting in a series of squiggles.

Squiggles that then become the letters, words, sentences, paragraphs and scenes of my story. Sideways and onwards I watch them flow, each following the nib or the cursor, almost as if they’re lining up ready for inspection on a parade ground of pages.

(This ripe imagery does have a creative base, I believe. As a young teacher many moon ago, I discovered the fascination that young minds had for Dungeons & Dragons by running an after school gaming club.

That experience led me to explore the joys of board wargaming and, over thirty years later, I can still recall my parent’s living room floor covered with an enormous set of maps representing the Normandy D-Day landings, on the top of which roamed over a thousand cardboard counters representing Allied and German forces from battalion-size upwards. I should add that my parents were away on holiday for most of that week-long campaign. (It ran 24 x 7, I was only stopping to briefly sleep and eat!)

In between coming up with story ideas like those above, I’ve also been thinking again about what defines science fiction and find myself returning to a quote from the Kindle Ebook edition of Ben Bova’s excellent work, The Craft of Writing Science Fiction That Sells:

Science fiction stories are those in which some aspects of future science or high technology is so integral to the story, if you take away the science or technology, the story collapses.

Of course, science (in my understanding) amounts to a well-established canon of laws and observed phenomena and as a science fiction writer, I’m definitely all about creating stories that can’t help but probe the limits and implications of these physical laws on my characters, human and otherwise.

I know. It’s a tall order but somebody’s gotta do it.

This is probably why I’m not much drawn at present to write or read fantasy. Maybe that&‘s a mistake on my part because I also find myself pondering over Arthur C. Clarke’s famous words:

Any sufficiently advanced technology is indistinguishable from magic.

And that’s where I&‘m headed with a new story that will remain under wraps for now.

Well, some people do know about this magic dust* story. Subscribers to my email list received news about it a few days ago. You are welcome to sign up for future updates.