The post’s title is classic SEO clickbait, I’m not sorry to say, but there’s a kernel of truth to be found within.

Older buildings get demolished in Japan on a regular basis because of the ever present earthquake risk and the land itself being the prime asset. Crews usually do a fine job of tearing things down with the minimum of fuss, dust and noise. Everything visible in the photo will be cleared in a few days and the patch of land made ready for whatever is to come next: a ramen shop, a house, a car park space for rent. 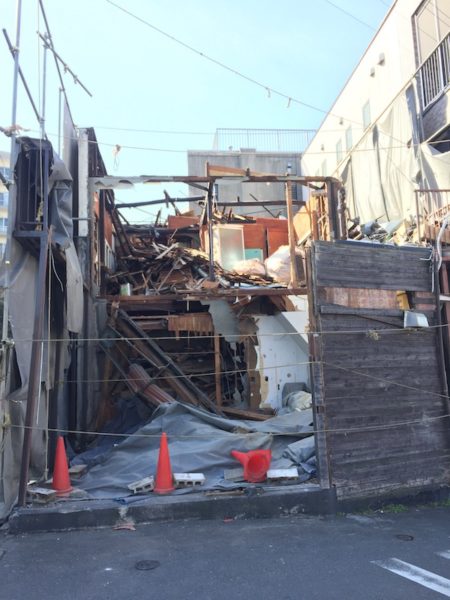 In theory, my own short story writing process should unfold in a similar manner, so that from the rubble of a thousand ideas, a finished story emerges.

Or, if a story is already underway, then the story creation process should behave as if entropy is running backwards so that the imagination actively constructs an engaging narrative out of a pile of possibilities.

There is also a third way this metaphor can (and sometimes does) play out. And that’s the one I must be most on guard for.

I have a great idea for a story, begin writing it, but doubts soon creep in, and the writing slows to a crawl.

I attempt to fix the story’s problem analytically by entering the creaking narrative via a back door with a sign on it saying critical self-editor at work, abandon hope all ye who enter here.

I’m looking for that diamond in the dust.

Whereupon, imagination departs in a huff at being second-guessed, and the flimsy structure collapses on me in a heap of self-recriminations and I’m no bloody good at this writing lark mind-f#cks haha.

My goal with this 52 stories in 52 weeks challenge is to assemble some of these creative structures known as short stories, and to therefore learn more about the nature of (my) personal creativity.

It’s been a hoot so far and what I’ve leaned is that imagination and ideas have a grand old time running wild and free in my subconscious, but only coalesce into an interesting and readable form whenever I put in some serious butt-in-chair time. Same as it ever was, I guess.

For those keeping score, I should have written at least twenty stories by now but am still in the middle of #11. There are some less busy weeks to come and I have every confidence that I can still achieve the goal with some help from the boys in the basement (Stephen King’s words, I think.)

One creative imagery technique my little helper prompts me to play with is visualization which, in my experience, is really a playful but intense use of the imagination given rein to project between present and future probabilities.

With the above in mind, I have begun imagining in idle moments that buried under the rubble in the photograph above is my current short story collection of misfits and that there’s going to be a fine library there soon filled with 52 of the little darlings by the end of the challenge.