On Reading and Breathing Oxygen

I finished reading Oxygen, and what a story it was.

Co-authors, Randy Ingermanson and John Olson, have written a terrific yarn of danger, suspense and intrigue aboard a NASA mission to Mars. 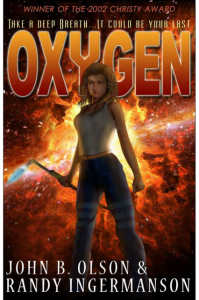 From the book’s promotional page:

An explosive decompression accident on the way to Mars leaves the four astronauts with only enough oxygen for one of them to reach the Red Planet alive.

My Kindle iPhone app’s fast becoming a trusted friend while scooting about on Tokyo’s busy trains and subways.
For one thing, it’s more convenient than lugging a tablet around because I rarely get a seat.

A smartphone’s lightweight, compact and not easily nudged from my grip in a packed carriage.

Oxygen’s one of those science fiction gems that will probably be rediscovered when humans begin travelling again within our solar system. It’s sobering to think that the book was published just before the US’s military response to 9/11 diverted resources and budget from future ‘NASA spectaculars’, such as a manned mission to the red planet.

Randy and John are both science Ph.Ds, but they don’t let the science get in the way of what happens to four ‘genius level’ characters put in peril a long way from home.
I was fascinated to follow how they interacted with each other before and during the mission. And while the storyline was frenetic at time, it also paused for breath when apparent hopelesness called for moments of reflection.

Although both authors write for Christian fiction markets I think the story will appeal to many readers of hard science fiction or techno-thrillers. Yes, explicit language and sultry scenes were absent (cue “two men and two women cooped up in a cramped space ship for months”) but I suppose real life NASA protocols would cater for such scenarios.

Oh, and there’s an ending to die or to cry for.
Bravo! It kept me guessing to the very last sentence!

I’m sufficiently impressed with Oxygen to buy its sequel, The Fifth Man.