More About Clustering and Writing

This is a followup to my November 2016 post about an idea for a Nanowrimo story, tentatively titled Lunar Blackout.

Gabriele Rico’s book so impressed me that I ordered the first edition version from her website. (Gabriele passed away in 2013 but the website is still online and the order page worked fine. I think it’s maintained by a family member.) 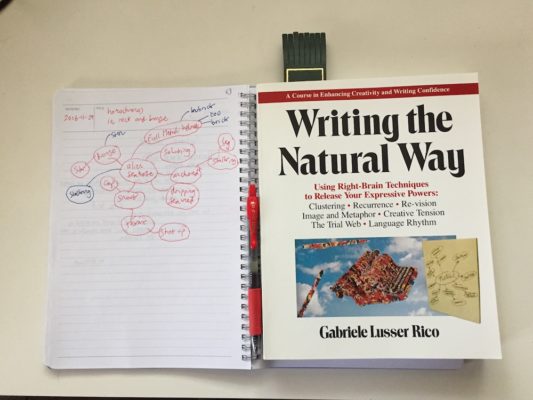 The Alien Seahorse is a cluster that emerged from one of the exercisess in Dr. Rico’s book. It’s become a short vignette. Maybe the basis of a future story?

I taught in portacabins over thirty years ago where colored chalk and leather arm patches and overhead projector acetates were a young teacher’s working tools. I guess I was ready for mind mapping because the space available to write on a blackboard before it had to be wiped off frustrated me a lot.

Mind maps promised a whole lot more in terms of creativity and in terms of the amount of information that could be packed onto one A4-sized page (or board).

And Tony Buzan’s mid-70s books opened a door for me to the rhythms and signs and cadence of writing unhindered by templates and guides and didactic devices. Although Gabrielle&‘s book appeared in the world around about the same time, I didn’t know of this natural woman’s work until a few months ago when my design mind, as I imagine she might say if we could meet up, sought out a connection between mind maps and outlines. I’m talking about outlines for stories, blog posts and longer pieces of writing.

And that’s how I discovered the fun that is clustering: Gabriele’s idea about how to give birth through words to the worlds  of the psyche. These are the connected thoughts I sense are inside me but are, for reasons unknown, often reluctant to appear. Sometimes they just can’t get out because my sign mind (a term used by Gabriele) is busy hindering, editing, censoring and stopping the incredible and the fantastic and the controversial within from showing up in the material world.

So, from my current understanding of creativity and storytelling, I think what Gabriele hit on is the existence of what she calls the design mind and what I refer to as my daemon/muse; that ghost of inspiration somewhere in the distributed clusters and networks of neurons in my brain.

And although the brain science behind Gabriele’s book has moved forward since then, I find it convenient to regard the surface personality aspect that is me (my ego mind) as residing on top of a deeper and much more expansive core personality capable and willing to flow mostly unhindered through a mantle of thoughts and emotions and up onto that thin, brittle crust of captured imagination I know as writing and reading.

These organized letters and words thus form a congealed, cooled version of what was once molten and explosively hot. And we writers call that solidified format a draft; something the ego’s sign mind loves to work on, bless its little heart.

I’m grateful for Dr. Rico’s discovery and development of clustering, and for Tony Buzan’s work on mind maps. Together, they are helping me to locate the natural pipes and vents of creativity and fulfillment. 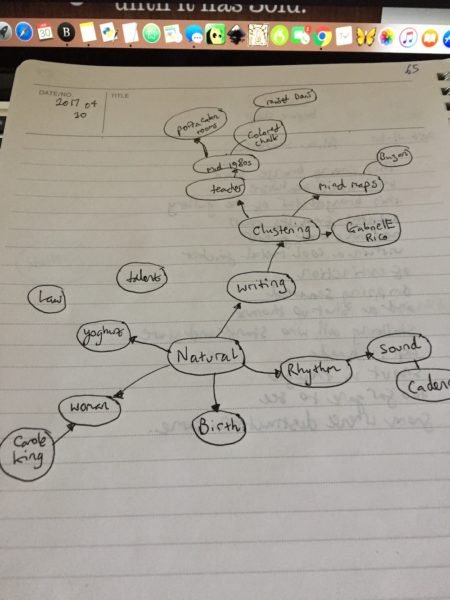 (Postnote: The image here is of the cluster diagram for this post. I drew it in ten minutes around the word, Natural.

I then hand wrote a twenty line vignette on the facing page in about twenty minutes.

My attempt to dictate the resulting vignette as a longer piece into Dragon Naturally Speaking (DNS) and then have that software produce a transcript was only partly successful.

I’d say about 80% of it was understandable and the remainder pure gibberish. That’s kinda my fault because I’ve not trained DNS very well, I guess.

While tidying up this gibberish, I received quick flashes of insight linking natural with the Earth, and the idea of the core-mantle-crust model from geophysics.

Perhaps you can decipher how I got to remixing facts about Earth’s inner structure with my own surface and interior views of creativity and personality. It’s quite a rush when it happens and I’m hoping for many more of these trial-web shift*s (as Gabriele labels them) in my role as a writer of science fiction.