Man On Wire In Japon

Do you ever get a feeling that something or someone’s going to do well? A little tingle of excitement that makes the nerve ends come alive?

I for sure got that response when first learning of Man On Wire last August, and was thrilled when it won an Oscar for Best Documentary some months later.

Well, it’s been a long wait but finally the film is being shown in Japan on 13th June.

And while out for a birthday lunch with my better half today, I spotted this leaflet in one of Tokyo’s up-market department stores, Takashimaya. 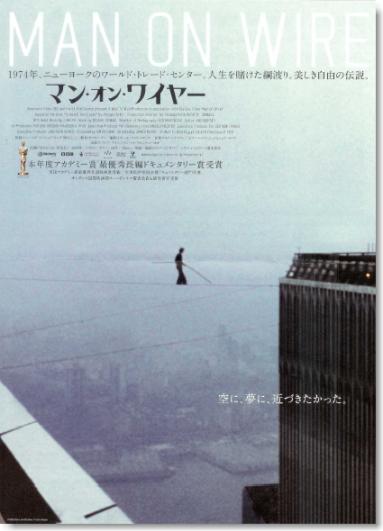 I’ll be going to see this for sure.

On one level it&‘s just a ripping good yarn, and all credit to everyone who worked on the production.

But I still find myself drawn to the innocence of the whole, goofy adventure.

And wonder what was lost as Philippe became famous (for a time) and life returned to normal.

See every day as a true challenge and then you live your life on the tightrope.

That tightrope had the logical, analytical me thinking too.

A rather massive undertaking to pull and fix the heavy cable between the Towers, don’t you think?

Requiring team work of the highest calibre, along with meticulous planning?

You would think so.

But real life’s sometimes a little messier and chaotic than we might ever suppose.

To show you what I mean.

Here’s a link to a April 2008 Time Out New York article (Oct 2011 Update: broken link) on the movie - check out Jean-Louis Blondeau’s comment from Jan 2009. Gives another insight into the story.

The photos are all of interest but check out from #52 onwards.
The accompanying text is also remarkably poetic.
Maybe JL’s thinking in French as the English forms in his mind?

If an English version of his book appears it should make for a great read.

Indeed, there’s always more than one side to every story