Japan. Down But Not Out

The past is a foreign country. They do things differently there.

The Go-Between, by L.P. Hartley

That opening line’s puzzled me since reading his novel over twenty years ago. What did the author really mean? 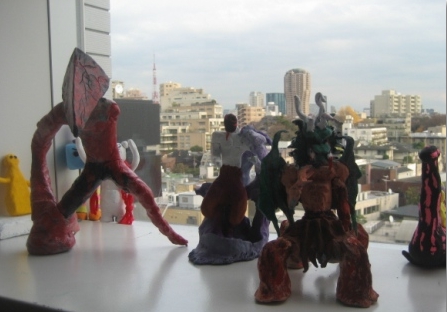 (The picture shows a view from the top taking in Tokyo Tower and a group of super heroes), when a slight wobble had me pause mid-step.

Thinking it was just another of the many tests carried out by construction engineers on the adjoining new extension over the last few months, I attempted to resume my ascent.

At that point primal fear and survival impulses kicked in as I felt the building lurch in multiple directions, rather like a helterskelter fairground ride.

I can remember debating with myself if I should run back down the stairs but instinct propelled me up to the 7th floor and under the relative safety of a sturdy desk.

Memory blurs over what happened during the next 90 seconds but terror and shock were definitely uninvited companions as the floor swayed and accelerated to what I sensed were alarming angles.

I clung tightly to the desk and, for a brief moment, wondered what might happen if the floor or the ceiling were to give way.

(Later on, there was time to reflect on how well the architects and engineers had designed this building to dampen energies that could have easily cracked walls and supports.)

Throughout this phase of the ride I could hear an enormous cacophony of sounds, none of which I’d noticed in previous smaller quakes. There was thumping, high pitched whines, groans and creaks, as if the building was lamenting an agonized and inevitable death.

And then, without any warning, the vibration and noise simply faded away. The building came to a gradual stop and, much to my amazement and relief, appeared to be completely unharmed.

Looking back on that fateful Friday, a mere nine days later, I find myself mourning the loss of an old, dependable friend. A Tokyo I could set my watch by these past seventeen years is struggling to get back on her feet again.

Battered by aftershocks and witness to the misery and suffering throughout much of North-Eastern Japan, threatened by power shortages and invisible enemies, she will need much care and attention to make it through the coming months.

In LP Hartley’s novel, future happiness shattered into a thousand pieces because the pain of heartbreak and betrayal remained with one of the key characters to the bitter end.

What gives me strength, and why I choose to remain here, is that Tokyo and Japan have gone through calamities across the centuries and survived. So, while there are risks and uncertainties ahead, experience suggests this country has a collective future worth living and working for.

To my Japanese relatives, friends and colleagues, and to everyone rooting for Japan to pull through this disaster, I would simply say:

The future’s unexplored territory. You can do things differently there.

PS I changed the ending quote from, The future’s an unexplored country. They do things differently there, to what you see now. I think it expresses a warmer, more welcoming place; not without risks, of course, as one probable future path among many.