How To Follow Through On Habit Change Using Hidden Vibrations

###Are You Having Trouble in Finishing What You Started?###

As a coach, teacher, copywriter and parent I fall down on good intentions more often than I would like to admit.

But I’ve been testing out an approach since May 2007 that has helped a lot.

This is a long but important post. WARNING! Your PGS is now on high alert and may even influence some of you to stop reading right now.

But if you do click away you might miss out on at least knowing what PGS stands for. And why it’s so powerful and useful in helping you create more of what you want.

That oughta keep it busy.

Read on my friends.

In the June 24th post about following through I mentioned Steve Levinson & Pete Greider’s work, and left you with a puzzle at the end.

If you followed through (ahem!) and checked out their HabitChange.com site, you’ll have discovered that my use of the FireFox LeechBlock app is an example of their second master strategy: WILLPOWER LEVERAGING (That’s the answer to the puzzle.)

My good intentions to stop surfing the web when I should be writing have been insufficient. Too easy to pleasantly goof off, and with no immediate pain for doing so.

The hit comes later when I realize my monthly writing income has missed yet another forecast but the time gap between financial loss and contributing behavior is too wide.

I like the LeechBlock app because it’s now more difficult and inconvenient for me to drop the ball. If willpower is really weak and I start to switch it off and on (I’ve done that a few times), then I can set the app to prevent me from changing anything during the prohibited times.

In other words, I can up the stakes and give my willpower some much needed support and leverage.

And it works. (For me, anyway. Your mileage may vary.)

What A Weak-Willed Character You Are, McClure!

Now, just a darn minute! That’s no way to talk to someone who’s read shelf-loads of self-help books and listened to hours of guru 10-step methodologies.

It’s all mind over matter, good character, never-say-die, success is an inside job. Period.

And anyone who says otherwise is a lilly-livered loser!

Isn’t that what many of the motivational speakers preach?

Hey, the problem’s inside YOU and aint no way you’re gonna fix it without some kinda quantum-soup-to-nuts personal core-cleansing transformation, buddy.

Steve & Pete refer to this as the It Must Be Me theory of self-blame which arose because the Follow Through Fairy Tale fails for so many people.

The Follow Through Fairy Tale is one where motivated individuals set great goals and make New Year Resolutions etc. All they then have to do is keep taking regular action to start bringing these fantastic changes into their lives over time (note: we’re not talking quick fix here).

But many don’t take action for very long.

And others give up without even starting.

Well, hey presto, the It Must Be Me gurus will often suggest that you’re lacking something they already have in abundance: guts, commitment, drive, ambition, creative visualization ability, access to the sun god. Whatever.

Look out! If they name it you probably don’t have it! (Or not enough of it.)

Let’s try a different approach, one that at least acknowledges the outside environment (people, systems, society) as a significant enabler / inhibitor of what we are capable of achieving in a lifetime.

And one that seeks to better understand why Nature did what she did with our species over aeons.

First, I gotta tell you, there really is something strange about the way you think, act and behave, but it’s not your fault.

Does The Human Mind Have A Design Flaw?

According to Steve & Pete, it does.

In their eyes, 21st Century humans are caught in the entanglements of a still evolving intellectual and rational thinking mind; the one that sets us apart from other life forms on this planet with that of a more primitive and emotion-based survival instinct.

Their premise is that this primitive mind (they call it the Primitive Guidance System, PGS) has a different idea on what you should be doing right here, right now. In a sense, it’s a remnant of the survival mechanism that helped humanity through all the life and death scenarios since primitive times.

Now for the thinking mind.

Oh, how my ego self is impressed and justifiably proud of the logical and precise intellect. And yet it delights, in a manner Mr Spock would no doubt approve of, in rising above the baser, survival emotions and instincts.

And it excels in creating great schemes, goals and outcomes but often struggles with their implementation and delivery.

Steve & Pete refer to this mind aspect (my words) as the Intelligence Based Guidance System, IGS.

The IGS has great ideas but when these clash or, more likely, interfere with what the PGS is sensing / feeling / experiencing right NOW, something’s gotta give.

The struggle often manifests as procrastination behaviour, leading to not doing or completing what the IGS knows makes perfect sense.

Further reinforcement of our It must be me internal self-talk.

But when the IGS and the PGS are in alignment (I like to think of it as a truce sometimes haha!), then creative flow can really happen.

So what’s this design flaw?

Well, Steve & Pete’s supposition is that Mother Nature has kept the ancient PGS around in humans as a fall-back in case things don’t pan out with the modern IGS. 😉

In the book Steve describes one of several a-ha moments that stimulated his IGS/PGS views while he was changing money at a bank in China.

The teller first used a modern electronic calculator to work out exactly what money he would get. But then she went and got an ancient abacus to double check the calculator’s result!

My understanding of Steve’s ideas is as follows:

The design flaw is that our best IGS-created intentions to follow through on a future outcome are overpowered or weakened by the more immediate PGS survival system.

Therefore our failure to sometimes follow through is not usually because we lack sufficient willpower, self-discipline or get-up-and-go character.

Message To IGS: If You can’t Beat ‘em, Join ‘em

In their book (which I highly recommend), Steve and Pete use a series of stories to explain how their awareness of the powerful PGS and the weaker IGS can be harnessed to follow through on our intentions.

The book’s structured as follows:

Section 1: (90 pages) introduces you to their new perspective on Following Through.

Then in section 2 (approx 100 pages), they go through their Following Through Strategies These are:

Master Strategy #1 (Spotlighting) will be clear to anyone who understands the power of the environment to influence their behaviour.

For example, a highway patrol car seen in the rear view mirror automatically has us checking our speed and becoming a model driver.

But after the police have gone, what do we usually do a short time later? (Although the existence of speed cameras may have partially changed this behavior.)

Many people will go back to driving the way they were before the cops showed up.

The trick with strategy #1 is to select only specific cues from the many distractions around us, and use them to repeatedly trigger our good intention e.g. to be a safe driver.

You can use all sorts of cues to train this habit: telephone ring tones, specific sounds in your house and so on. Visual cues also work well if they are themed with the good intention in mind (the book discusses how to do this.)

The driver would then create a brief image of driving in a safe and relaxed manner and link it to the chosen cue. When next interrupted by that specific cue or spotlight, his attention is briefly on his intention of driving excellence.

(From a road safety perspective, I wouldn’t use the MotivAider or specific cues WHILE actually driving. But I would use them while I was sitting at my desk or relaxing at home. Others may disagree but I’m thinking safety first here.)

For some of my habit change experiments, I use a very robust, light, silent and mobile device from Habitchange.com to do it all, and without anyone ever knowing what I’m up to.

Introducing the MotivAider: A Swiss Army Knife Of Good Intentions 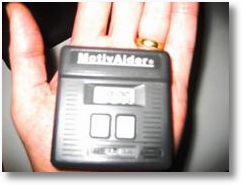 Sorry for the unwanted flash effect but the point is to show how small the device is.

(My wife and daughter are in Korea right now with my camera and so this 2008 photo will have to do. Anyway, you can find some great photos at habitchange.com.)

The Motivaider clips onto my belt or waistband and since it weighs only 2 ounces (60g), I hardly notice I’m wearing it. (It’s underneath my shirt and therefore not visible.)

Then I set the MotivAider to silently vibrate for a few seconds against my body while I imagined the cue phrase, 77.7, and a sleek, fit runner whizzing along in my local park. That runner was me.

Finally, I set the device to automatically count down from 15 minutes. And, right on cue, every 15 mins I got a silent vibrational reminder.

That triggered the 77.7 image to pop into my conscious mind and I thought, yeah. I’m at the ideal weight. Done.

Sometimes I missed the vibration (you can control the vibration’s intensity and duration) but no matter. I was getting four per waking hour, for as many days as I wanted.

I think I used it for just over a month on that project.

And I believe it did have some effect as I reached my target weight, from 89kg to 77kg, in a little over a year. No specific diet but I found myself eating smaller portions and (mostly) avoiding the all too frequent late night chocolate snacks I secretly enjoyed while writing.

The next MotivAider project will be to help me start and finish some information products I’ve been avoiding. A couple of them I announced on this blog months ago but haven’t followed through on, for reasons only my PGS really understands.

At the very least I expect the MotivAider cue to engage my attention often enough to figure out a plan and how to execute. (It’s frustrating to keep writing on my Do-To list:

How about you and your habits?

Are you ready to start following through on what you want to do more of?

PS: There is a newer MotivAider on the Habitchange.com website which has an an improved random number timer for when to buzz you. The price is shown as $59.50. My model is an older one (I never used the random function) and they’ve now reduced it to $49.50 plus shipping.)

2020-05 Update: I still use the same Motivaider I wrote about in this post. Works great.