For example, many years ago my early winter athletics training schedule looked something like this: 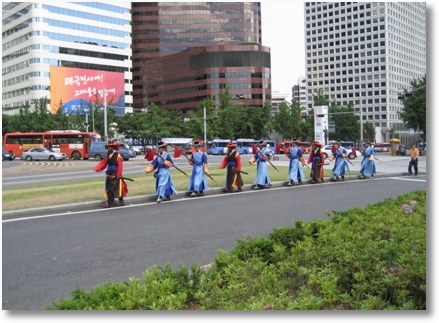 Looking back on it now, I’m still amazed our group got so much hard work done - all based on a shared belief that the results would be seen in faster times and performances in the summer racing seasons ahead.

Can you guess which day of the week we all looked forward to the most?

Yes, I can still honestly say that I (and my body) l-o-v-e Fridays!

That was the one day when mind and body were left alone for 24-hours.

And even though I no longer train at that intensity (or compete at all), Fridays still trigger an emotional high not connected with the end of the work week.

Strange then, that I of all people, would ignore such a useful habit and opt to work right through two consecutive Friday rest days, resulting in an unhealthy level of physical and mental tiredness.

Is there a habit which has served you well over the years?

And are you ignoring or honoring it?

PS: The picture was taken during a short 2006 trip to Seoul, Korea. This is near to the Namdaemun Gate, a 610 year old South Korean National Treasure that was destroyed by fire in February 2008.