NASA’s press release last week about the seven exoplanets orbiting the Trappist-1 red dwarf star generated a lot of interest. I hope we’ll learn much more in a year or two once the James Webb telescope (late 2018) and some ground-based projects start to gather and process additional data about the temperature, pressure and atmospheric contents of at least the three exoplanets in the so-called goldilocks zone for this system.

It’s an exciting time for astronomers and astrobiologists. And for science fiction writers too.

For example, I want to know if they are not only tidally-locked but if there’s a temperate zone between the hot and the cold sides.

The possible existence of a habitable strip (for at least the evolution of simple life) between two extremes on an exoplanet has me rereading astronomer Neil Comins’s book, What If the Earth Had Two Moons? And Nine Other Thought-Provoking Speculations on the Solar System.

He addresses the scenario of a much smaller sun than ours in chapter 8, What if the Sun were less massive?

Coursera’s MOOC, Life on Other Planets, is also worth taking as a refresher. (I posted about both resources here three years ago: StarStruck 2014: Imagining Other Earths (MOOC).)

What does this mean for science fiction?

Well, no doubt as more exoplanet systems are discovered and our scientific knowledge of them increases, writers will be inspired to create stories of alien artifacts waiting for us, stories of alien civilizations on nearby exoplanets in conflict with each other, even stories of our futile attempts to contact them by traveling through space.

What excites me about these developments is the likelihood that Earth-like exoplanets may be numerous across our galaxy, since there are so many stars similar to Trappist-1. Whether there is life on them is of course another story. Something that we science fiction writers are quite good at coming up with.

To wrap this post up, and in celebration of the Trappist-1 exoplanet reveal, here’s an acrostic poem I penned over the past few days. (There’s a picture of the original handwritten poem at the end of this post.)

Xmarks the spot on computed cosmic treasure maps where

Atmospheres, oceans and temperate zones because the

Extraterrestrial life on globes like these magnificent seven even if

Tidally-locked in the Trappist’s embrace while

Spitzer and co. continue to collect and detect. 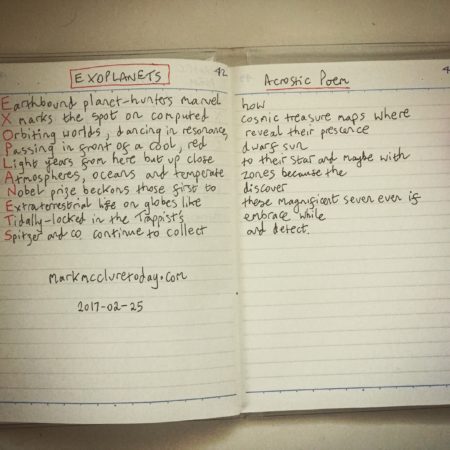