Reinforcing a Habit Two Steps At A Time, when the only way is up. 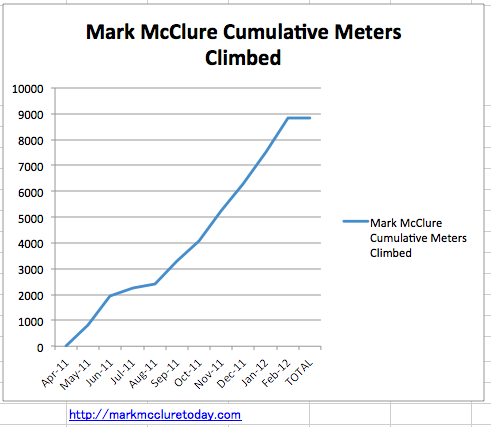 You can find a number of posts here about building or changing habits.

In my experience, creating new habits usually takes much longer than the twenty one continuous days sometimes mentioned by self-help books and speakers. Sure, willpower can get you started but turning that into a regular routine requires a workable system.

For example, one of the exercise goals I set last year was to strengthen my legs using just my own bodyweight. No going to gyms. No lifting weights.

Walking and running would help but not as much as I wanted. And I wasn’t aways in the mood to do circuit-type training. However, one asset close to hand was nine floors of stairs I could choose to walk up every time I entered the building.

This was the Start of a System

At the building entrance I’d walk past the elevators and climb the nine floors, two steps at a time (well, for at least 90% of the ascents) and then tick off that successful ascent& on the monthly calendar shown at the end of this post. 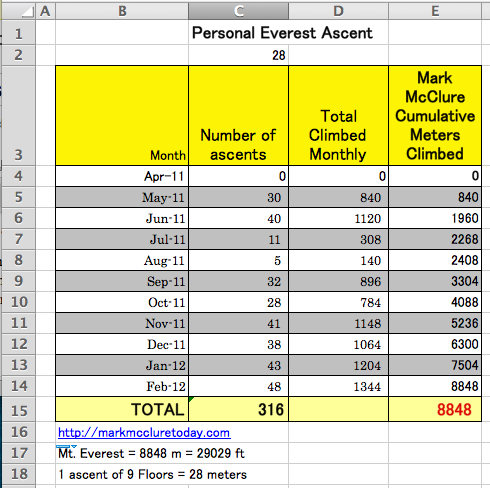 The first couple of months were tough as my legs were not used to climbing through a vertical height of 28 meters (or 91.8 ft). However, I started to notice improvements in muscle tone, especially in the quadriceps, and I was also able to run up stairs more easily when trying to catch a train.

With these small successes it dawned on me that I could make this a game (coaches love games) by aiming to complete a weekly number of ascents. On average, I planned for two ascents each day but was often inspired to knock out three or four. (Four ascents meant I’d climbed more than 100 meters in one day; a psychological goal of note.)

Some time in September 2011 I realized that at 3000 + meters, I’d almost climbed the equivalent of Japan’s highest mountain, Mt. Fuji. (I took this photo of Fuji-san some years ago while running along a local lake.) 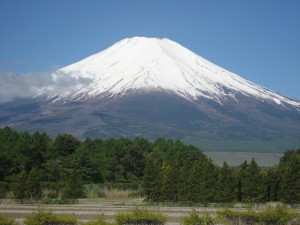 From there it was but a thought to imagine standing on top of the world, albeit with none of the dangers of doing it for real.

The calculation was as follows: 8848 meters (Mt. Everests height) divided by 28 (the vertical height of this nine storey building in Tokyo). Giving me 316 ascents to reach the goal.

Building a habit becomes easier if it also becomes part of who you are; in other words, the activity is seen as expected behavior. And that’s how stair climbing became a tag with which I was identified. I was almost never seen in the elevator, only on the stairs.

Of course, I also continued to feel good physically about these exertions. So much so, that Everest or Rust was a little wordplay I became attached to. (If my body’s still in working order at 51, I’m going to make d*mn sure to keep it oiled and running.)

The final piece to building this habit came from the subtle influence of a paper and pencil ritual.

Keep a Record of Your Efforts and Results

Take a look at the monthly record sheet I downloaded from the time and date web site. 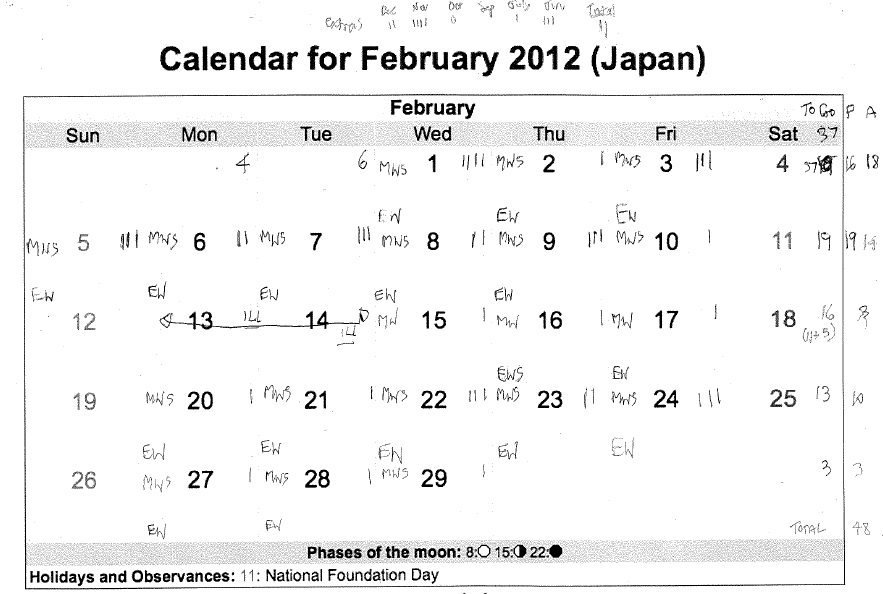 ;After each completed ascent I made a pencil mark on the calendar day because this was simpler and faster than using an electronic tracking tool.

In the column on the right, P was for planned ascents, and A was for actual.

Sometimes I would use the tension between P and A to break a personal weekly ascent target but it wasn’t really that important to the overall success of the project because setting records every week was not what I signed up for.

The monthly calendar (letter/A4 size) was pinned to a wall within my peripheral vision and in a way, became a trusted but silent companion to the Everest eejit’s exertions.

Not only was I training myself to close out each ascent with a tick but I ended up feeling compelled to do so immediately, because otherwise I’d forget and therefore have climbed 28 meters for NO REWARD.

The reward nature of the ascent was delivered as much by a simple pencil mark as by any self-satisfaction gained from walking up nine flights of stairs, two at a time.

Interestingly, though I valued my friends support, they were not really motivators for me to keep going. Sure, it would’ve been a wee bit embarrassing to quit and have to put with some friendly teasing. Not a show stopper, however.

Recording results seems to be one of those psychological tidbits I get a high from, and probably explains why I’ve kept running diaries since I was about 16 years old.

By the way, the MW and EW labels on the calendar refer to morning walk and evening walk, respectively. By getting off the train a few stops before my normal station I get a good twenty to thirty minutes walk twice a day. This is another example of how recording the result is an essential part of completing the task and reinforcing the behavior.

What’s Next? The Seven Summits.

Well, I got such a kick out of climbing Mt. Everest that I want to continue the activity as part of a regular day.
This time a few colleagues will join in and I’m interested to see if their participation will alter my motivation to complete the goal.

At the time of writing, the goal is to climb the equivalent of the so-called seven summits, one on each continent.

There seems to be some debate about whether it is 7 or 8 mountains (see wikipedia) and we’ll decide that later. Either way, this time the ascent will be the equivalent of at least 40,000 meters - that’s 1429 ascents of this building’s nine floors.

I decided to donate 8,848 Yen (about $ 106) to people who are helping refugees and others affected by the Earthquake and Tsunami that badly damaged NE Japan (Tohoku area, in particular) on March 11th, 2011.

That’s 1 yen for each meter climbed.

I’ve blogged about their efforts in this post titled, Gambare Iwate.