Eddie Izzard is an actor, comedian and part-time transvestite, but no one thought he was much of an athlete. Until he decided to go for a run; a very, very long run.

And with those words the BBC takes viewers on an incredible challenge, one that saw Eddie run 43 marathons around the UK, and raise hundreds of thousands of pounds for the charity, Sport Relief. 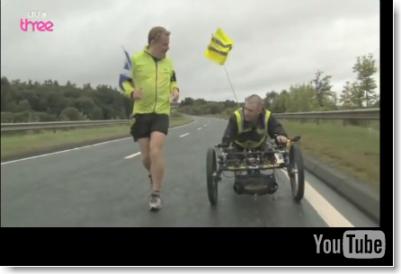 The enormity of Eddie’s achievement in the summer of 2009 completely amazes me.

He was 47 at the time, and with no known distance running background. And even with one, this would still be a very taxing event for seasoned ultra-distance runners.

If you manage to track down the original programs (I found them on YouTube), be prepared to laugh and cry yourself silly at this man’s lunatic adventure.

I found the last two episodes to be deeply moving, as Eddie battled wear’n’tear injuries while also planning to run his fastest time ever (under 5 hours) and this after 42 marathons in the previous 7 weeks!

I could also sense how the camera and support crew had bonded very closely to Eddie and his stubborn determination to finish as planned. (Even the UK Olympic Medical Professor looked suitably impressed. Maybe they can bottle some of Eddie’s grit for London 2012!)

From a coaching and self-growth perspective, there are some tremendous lessons in watching what Eddie accomplished.

It’s all there: Eddie’s goal, his deeper reasons for pushing on and on (watch the program to see what these were), and the price to be paid - basically, lots of blood, sweat and tears in the UK’s best miserable summer weather, and often alone.

Truly, whatever big goal you have for yourself, a proven approach for dealing with success, failures, pain and team work, are right here in this marvelous piece of television.

The kicker for me was when Eddie met the Olympic medical staff for the first time and the guy asked him about the nine-month training regime he would need to get ready for such an arduous event. Eddie was, with a comedian’s sense of the absurd, having none of that, replying he’d got just 5 weeks to get ready lol!!