I wrote about the Japanese dolls festival back in 2008. 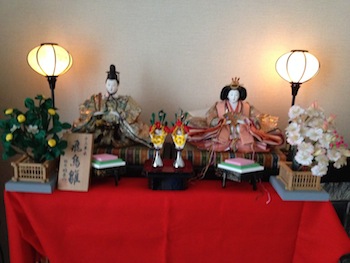 The red table is about one meter wide, with our TV set out of shot and to the left.)

Well, six years on and here they are again for what is probably their final appearance in our home.

And that’s because, all being well, daughter #1 will be leaving the family nest this autumn.

(It’s a sure bet that Daughter #2, the four-legged version, will then seek to assume the vacated role. But somehow I doubt that any protective magic these dolls can wield extends to the canine world.)

The story goes that the Emperor and Empress dolls protect girls from harm by trapping evil spirits. In ancient times it seems that this bad luck was then floated out to sea on a boat containing dolls made from straw.

Wow! Here are the makings of an interesting fantasy yarn.

What if a few dolls were, shall we say, somewhat less than protective. Not in a malicious way; this is no Japanese Chucky, but imagine if they weren’t really asleep between March and the the following February.