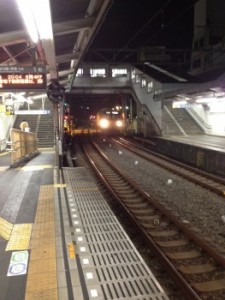 into sunshine and blossoms

Tokyo’s trains are well known for their convenience and punctuality. Alas, from time to time there are delays due to suicide attempts or people accidentally falling off the platform.

This poem came about from one such incident, the first time in nearly twenty years that the train I was riding was directly impacted, so to speak.

It was remarkable to see how quickly rescue teams, police and ambulance appeared on the platform (we passengers were still in the train and told to stay put for a while.) They seemed so experienced and calm and organized.

Of course, time is money for the train company, especially when their passengers are inconvenienced for too long and too often.

I guess I could be counted among those annoyed and somewhat weary commuters that morning. Once it was safe to do so and rather than wait for the train to move again (it took nearly an hour, I’m told), I followed others getting off and walked along the platform and out into the sunshine and blossoms.