Clustering and the Zen of Writing

A good chunk of this month’s writing time was given over to study. I know, I know. There&‘s no end to a writer’s apprenticeship but still, this exercise felt fresh and vibrant.

I’m referring to clustering. (See my 2017 post, More about clustering and Writing, for how I’ve used mind maps and clustering.)

The attraction with clustering is that I can get in the zone almost anywhere. No electronics required. Just pen and paper. Start with a prompt or even a single word and let the mind run wild with whatever associations get triggered.

You can see below how this turned out for a specific writing prompt, Ben finds a child.

Ben? A child? The temptation to start plotting this out as a story idea is something I&‘m trying to resist. Instead, I want the character(s) to reveal themselves almost by stealth as the clustering process spins more and more webs of interrelatedness.

And I think that’s what happened here. Ben is the focal point and it’s not surprising that associations around his name began to form a picture of a man, his physique, his hobbies, and even his dog.

I doubt I could consciously create something similar in the fifteen minutes or so I spent doodling this cluster on my morning commute.

For sure, it would not be half as much fun. You see, there was very little pressure to turn the cluster into anything resembling a story. It just, well, it just clusters and morphs until the connections slow and the flow state is then over for a while.

What happened next is that (a day or two later) I handwrote a short prose poem using the cluster as the springboard. Not all the clusters made it into the poem and that’s partly because I am using a small hand-sized notebook, and partly because they didn’t call out to do so.

The poem is handwritten on one single page.

Here’s the second and final version:

Ben, Ben the flowerpot man walks the river bank slow as he can with hickory cane and dog to hand the only man upon this land.

His watch chimes ten, time to turn, but homebound now he does not yearn. Around the bend, he has to peek, what is that the senile seek?

Then gangly limbs and dew-soaked grass conspire to put him on his ass, from where he spies on gorse gone wild, a smirking, hungry, evil child.

I probably could have taken the prose poem narrative a little further but I felt there was enough material to begin the writing exercise. Scroll down to the What I’m writing section of this post to see what emerged on the computer.

Short stories feature prominently this month. In addition to Asimov’s Science Fiction magazine (which I continue to enjoy reading on the train) I’ve also delved into short stories from Jack London and Ray Bradbury.

Sitting on my writing desk beside this computer is a gorgeous volume entitled The Collected Stories of Katherine Anne Porter. This one came highly recommended from several other short story writers, and I am so looking forward to reading it over the summer months. 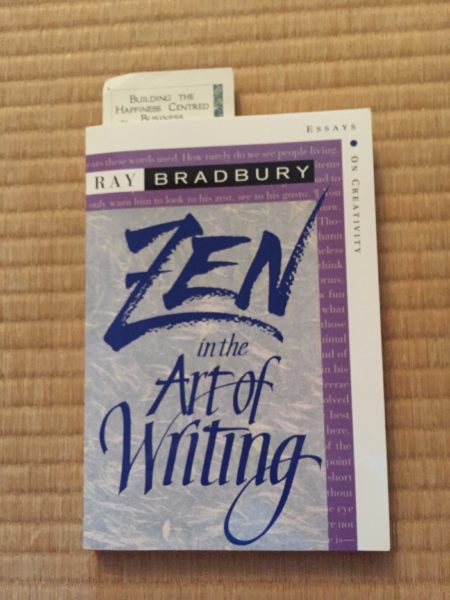 Ray Bradbury is on the list too not only because I have always admired his short stories but because I found the electronic version of Zen in the Art of Writing hard to get into.

Something about this book demanded that I hold a real paper version in my very own hands and let the magic leap the synapses.

Together with several marvelous videos of the great man speaking on YouTube, I feel like I am in some kind of writing nirvana.

In particular, Mr. Bradbury’s use of noun lists as writing / story prompts for the subconscious got my attention.

These lists came from his own life experience and reading, and focused on fears and delights such as carnivals and their attractions.

To me, the key to his method is captured in this quote from page 15 of Zen in the Art of Writing:

It was only when I began to discover the treats and tricks that came with word association that I began to find some true way through the minefields of imitation. I finally figured out that if you are going to step on a live mine, make it your own. Be blown up, as it were, by your own delights and despairs.

And here’s the piece I mentioned earlier about Ben’s view of the world. I can see now its limitations and where I left Ben’s viewpoint and got waylaid by word play, of a kind. Anyhow, it stands as an example of my going from clustering to prose/poem to narrative.

Bill closed the cottage door and headed out for his early morning stroll. First light on a glorious June morning and not a soul but him to see it.

The faintest glimmer of orange and red painted the eastern sky and reminded him to look down at his feet. Yes, he had them on this time; a pair of bright orange waterproof, slip-resistant walking shoes his wife insisted he wear since falling while bare-footed last month.

Gotta keep the old girl happy, he chuckled to himself.

Bill ambled the thirty yards or so to the end of the manicured dew-beaded garden, passing beds of marigolds and dahlias that clashed with his choice of pink Bermuda shorts, white cotton teeshirt and a dashing ivory-colored panama hat. From there he made his way through the line of shellbark hickory trees that graced the end of his property. He’d used wood from the oldest tree to make the walking cane he now clung to with bony, arthritic fingers.

Although near-sighted, he could still make out the river Stenbore, straight as an arrow and about as wide as one could be shot from a crossbow, flowing by on its journey to the Moore estuary, a good thirty miles away.

He heard the water’s gentle lapping against the edges of the public path and knew he was indeed blessed. Two heart attacks in as many years, a knee replacement, and yet here he was.

Above him the pale crescent moon and a handful of stars looked down on the elderly gentleman as he unlatched the wooden gate and started to walk along the gravel path. His shoes crunched the tiny stones and he shuffled toward a big clump of yellow gorse bushes growing profusely up ahead on the other side of the meander.

This was his goal, his marker. Take a breather on the old tree stump facing the bushes and then turn around and be home in time for a cooked breakfast, and a snooze with the newspaper.

He began to perspire with the effort and the morning’s light chill felt pleasant against his skin. About a dozen more steps and he was there. Propped against a blackened oak stump, the victim of a summer lightning strike many years ago, he breathed in the fresh air and took out from a small brown leather shoulder pouch three slices of pear his wife had wrapped in damp muslin for him to enjoy.

The first melted down his throat, its sweet juices a joy only homegrown fruit could provide. Bill, eyes closed, and blissed out by the early warmth of the sun on his cheeks and arms, was about to pop the last piece in his mouth, when he felt a tug, tug, tug on the right leg of his shorts.

A rabbit? A swan?

He’d encountered both before at this very spot and they were a damned nuisance to shoo away when food was about.

Good lord! He blinked once, twice in astonishment. There, looking up at him was a child, boy or girl he could not tell, wet to the skin and grinning from ear to ear.