Career Change Fear Has Nothing On This

I reckon there’s nothing worse than pretending to be unafraid of roller coasters when inside I’m a trembling jelly of terror.

A few years ago my daughter (maybe nine at the time) asked me to go ride the coaster in a Japanese theme park.

And, brave dad that I wanted to be, I agreed to this act of folly. 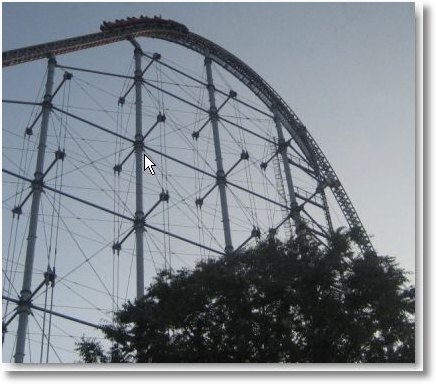 However, what I hadn’t counted on was her ladyship’s absolute nerves of steel because she requested the Japanese attendant (being the bilingual queen) to place us in the front car. Yikes!

Now, I’d never taken the front car in any ride in my life, figuring that there was some small reduction in fear by having all those mugs go over the drop before me. Haha!

Let me tell you; it’s one terrifying yet exhilarating experience to be slowly clanked to the top of the first drop, knowing there is no way on earth (short of a power failure, God forbid!) that ride is going to be canceled.

All the while my rational mind is coming up with all sorts of justifications why this ride is a good thing:

Is not centripetal force an amazing phenomenon? Ahhhhhh! Who said that?

As we arrived at the top the cars suddenly slowed down to an almost imperceptible glide, and then the sky, the surrounding view and the yawning chasm of what lay waiting in the next few heartbeats seemed to fuse as one.

Instinct took over and I forgot my better half’s stern instructions to look after the Princess of Paternal Punishment by having my arm around her at all times.

What! Is she mad?

I vaguely recall my inner critic lecturing me at this of all times.

Personal survival screams my reptilian brain, as a load of chemicals get dumped in the bloodstream to ensure just that.

Somehow I found both of my arms were rigid in front of me and my hands had gripped the safety bar tighter than I’ve ever squeezed any metallic object.

My feet were pushing the front panel of the car with what I felt was super-human force.

(I even wondered what would happen if I crushed the bar or pushed the front panel out as we slipped over the edge!!)

Then, in one adrenaline-powered moment, it was all over and we shot off for thirty seconds or so of high velocity madness.

The rushing wind, roaring sound and muffled screams of the passengers are what I most vividly recall as we looped-the-loop and rocketed up and down various drops.

At the finish I felt strangely subdued and even euphoric, though that was soon replaced by a certain queasiness in my stomach.

Tom Cruise can relax.
I will not be auditioning for Top Gun Part 2!

Alas, my adventures were not yet over that day as she-who-must-be-obeyed managed to have me chaperone her on two more coasters, including one where we went backwards up the slope and then spun madly in all directions as the cars careered around the track.

Incredibly, while I was still somewhat scared, I was no longer terrified of what these rides amounted to.
I hesitate to call them fun but there was a certain satisfaction in having survived the terror and enjoyed some of the thrills.

Which brings me to the link between this experience and my own career changes.

The obvious connection is fear of the unknown, and I see that most clearly in the initial decision to board the ride and be hauled, ever so reluctantly, to the top of the first drop.

I have my coach to hold me accountable for what I have chosen and to cheer me on and commiserate when times are tougher.