Well, summer’s stifling heat has all but gone and it’s now autumn in Tokyo. I always think of this time of year as nature’s reward for sweating and slogging through the previous three months.

However, the weather’s anything but dull and a second large typhoon storm in as many weeks is making its way up the Japanese archipelago. Roll on November with her warm days and gentle breezes. 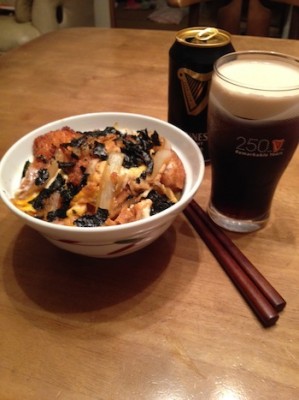 As you can see from the photo, I recently celebrated completion of another cycle round the sun with a delicious bowl of homemade katsudon, washed down by a Guinness or two. Many thanks to my S.O. and her sister for their kindness.

And fortified by good food and drink, here’s what I have planned for the next few months.

Goal #1 is to successfully complete National Novel Writing Month (NaNoWriMo) and kick start the fiction ideas I’ve been mulling over since this post I should be Writing 2.

I’ll also be making an effort to meet up with other NaNo writers in Tokyo during November.

Goal #2 will be to grow a tache in support of MOVEMBER (THE MONTH FORMERLY KNOWN AS NOVEMBER) IS A MOUSTACHE GROWING CHARITY EVENT HELD DURING NOVEMBER EACH YEAR THAT RAISES FUNDS AND AWARENESS FOR MEN&‘S HEALTH.

I participated last year and it was a lot of fun for a worthwhile cause see my post with the before and after photos.

Goal #3 is to get my non-fiction book about self-coaching and career change out of my head and into physical reality. More about that in a future post.

OK, that’s plenty for this update.