Ask and You will be Rejected!

You might be thinking I’ve got this title all wrong.
Surely it should be, ask and you will receive?

No, it is indeed, ask and you will be rejected!
And I believe in that strongly enough to have ask as one of the 5 strategic approaches I adopt in my business and life.

Every picture tells a story, so let me explain using this one as a metaphor. 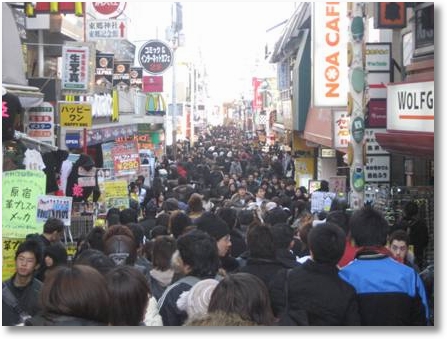 This is Takeshita dori (street) in downtown Tokyo, Japan - a long, narrow lane of a street near Harajuku station, and packed with mostly small and trendy boutiques. (The global designer brands are in glitzy shops on much bigger streets not far from here).

As you can see it’s wildly popular, especially with people about three times younger than me lol! And I did indeed go there and take this picture. It was only my second visit in fourteen years before joining the throng and following my better half and trend spotting daughter on an apparently random walk through most of the shops 😉

If you’ve got your eyes open perhaps you can see the golden arches of McDonalds on the left hand side. They have a 24-hour restaurant here and there were long queues as we passed by. Not much asking required outside this franchise, people just seem to spill into it.

And same thing for most of the small shops that open onto this street; they have a steady flood of potential customers coming and going all the time.

However, what you can’t clearly see is that there are other shops on the little side streets that lead off this main one. And they don’t seem to get a flood of people, more like a regular trickle.

So, I was intrigued to see how young African men were acting as the first part of the sales funnel for these out-of-the-way shops. Somewhere in the middle of that sea of people I watched one of these guys politely pitch mostly teenage girls as they moved slowly along.

He had positioned himself about thirty meters upstream from the exit where his client shops were located. That gave him about sixty seconds to do his small talking thing before the girls would pass beyond the exit.

And very street-smart he was too. He fitted right into the Japanese social etiquette of how street hucksters work. He never chose girls on their own, made no physical contact and walked only alongside them (never stood in front of them).

In those final critical three meters he would show them a small clipboard with pictures of the clothes, accessories and bargains to be had.

Decision time! He politely asked and they mostly ignored him and walked on by!

Undeterred, I then watched him make his way to the start (outside a 7-11 store) and repeat the same game. In eight sweeps I saw him net two groups and usher them off the main street to a waiting Japanese sales assistant.

The point being, that you have to ask when you want something - a successful career change, a more loving relationship, more money. You name it.

And you will likely be rejected, perhaps many times.

This has been my experience through career changes which took me from teaching to IT, as well as ultimately successful efforts to transfer from UK to Japan.

And it is the approach I expect of any coaching and mentoring clients I take on. That is, if you’re not prepared to fail faster, then you’re wasting time (mine and yours), as well as your money.

In fact, no goal setting book, seminar, system or coach in the world will get you beyond where you currently are, unless you first ask.

Asking is effectively about making choice. (A good choice for you, I hope, however you define good.)

It’s got nothing to do with asking for permission to act.

(Go watch Morgan Freeman in the movie, ‘The Shawshank Redemption’. When he’s finally released from a long prison sentence by the parole board, Red finds himself automatically asking his boss at the supermarket boss, for permission to take a bathroom break. You think that’s just a scene from a fictional movie? 😉 I know it’s acted out in real life, every day.)

And by the way, asking is not about launching a personal smash and grab raid on life. My personal definition of asking includes the golden rule; do unto others what you would have them do onto you.

Or, as one my mentors put it:

I wish you everything I wish for myself.

PS - to my Belfast-based readers: Takeshita dori is about 100 times more crowded than Castle Street and Cornmarket on a Saturday afternoon! Perhaps I just need to figure out something to sell that crowd. I could make a fortune.